Space 1979: The one where dinosaurs evolve from a Coke bottle to Bolero 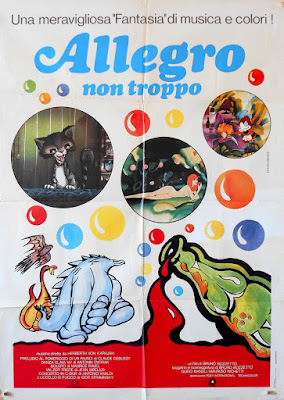 In the course of this feature, the one thing that has given me the most trouble has been animation. Back when I wrote out my Introduction, I set down the ground rule that I would be dealing with live action films, though even then I was considering a few exceptions. In practice, the real problem was where to draw the line. If I let in animated films, as I finally did with The Phantom Tollbooth, there were always going to be many more than I could cover without going (back!) to dedicated animation reviews. But the true counterpoint is that there are animated films out there, especially from the 1970s, that I really did not want to cover, either because they do not fit the intended theme and mood of this feature or because they do not fit my own tastes. For the present review, the third animation review after (dear Logos) Transformers, I am getting to a movie that’s in the middle ground, not offensive or incomprehensible but definitely not standard fare. It’s only fitting that it would come from the Italians. Here is Allegro Non Troppo, the European answer to Fantasia.

Our story begins with a studio producer type referred to as the Presenter, filmed in black and white, announcing that we are about to see an animated movie set to classical music, notwithstanding a threatening phone call from “Grisney, Pisney- some crazy American”. We are also introduced to an audience who have to be released from a giant holding pen, an orchestra of old women, an occasionally rebellious Animator who starts out in a dungeon, a pretty cleaning lady who catches his eye and a bombastic and bullying Conductor. Once the animation gets in gear, we meet an old faun still trying to chase beautiful nymphs, a trendsetter who despises the people who follow him to build a city, and a planet where life evolves from the germs in an astronaut’s discarded soda bottle. Meanwhile, the intervening segments grow more madcap and sometimes ominous as the Conductor tries to maintain his idea of order and the Animator grows more distracted by the lady. Things continue to unravel as we move on to the remaining segments, featuring a lonely cat in the ruins of a building, an angry bee interrupted by a pair of clumsy lovers, and the Serpent of Eden, who this time around gets a vision of the future after trying the Apple for himself. But we still have the ending, which turns out to be a choice from a lineup of improbable visions, and whether it makes the slightest bit of sense is up to you to decide.

Allegro Non Troppo was the fourth feature film by Italian cartoonist and animator Bruno Bozzetto, and possibly the first to be released in the U.S. The title was based on the musical term allegro ma non troppo, roughly translating “Not so fast!” It was undisputedly conceived as both an imitation and parody of Disney’s Fantasia, which was finding new popularity in the 1970s counterculture. The longest sequence set to Ravell’s “Bolero” was modelled on the Rite of Spring, while the final sequence set in the Garden of Eden used Stravinsky’s “Firebird”, a piece considered for Fantasia and eventually used in Fantasia 2000. The movie was released with a PG rating in the US, despite significant nudity in the first and final sequences. A shortened version was reportedly circulated with 10 minutes of the Italian live-action framing sequences cut. The movie has not been generally available on disc in the US.

For my experiences, I first heard of this one a few years back in an amazing book called The Dinosaur Scrapbook, which I had spent many an afternoon reading in my college days before that. It was mentioned there because of the Bolero sequence, and then for its imitation of the dinosaur scenes in Fantasia. I had no trouble looking up online videos of that genuinely famous segment, as well as a few more, but I wasn’t satisfied watching it in pieces posted by other people. Not long after I started this feature, I finally went looking for a copy at a decent price, which I had no doubt meant foreign, bootleg or both. What I ended up with was a “Region 0” disc (I confirmed typical of bootlegs) in Italian-language packaging that only plays on an allegedly portable Blu Ray player with a huge and absolutely terrible screen. For an extra disconcerting factor, I went through my first viewing of the whole damn thing before I figured out how to turn the subtitles on. I must say, in some ways, not knowing what anyone was saying made it more interesting. (You win this one, Brandon’s Cult Movies.) When I finally got a handle on the framing material, I quickly recognized that the movie as a whole is even more warped than it appears, if not entirely ugly.

What one should have no trouble gathering even without the live-action parts is that this movie is both critical and willfully dysfunctional. It doesn’t simply send up Disney, but the whole mythology of “progress”, ultimately the main reason it’s of interest here. In these terms, the first sequence is a red herring, if vividly awkward in its own right, following the descent of the lovelorn old satyr from pitiful attempts at courting to less certain visions that are as absurd as they are lewd. The real narrative takes hold in the second part, set to Dvorak’s Slavonic Dance, as we follow a tribe of cliff dwellers into urban life and finally the rise of militarism. Together, the two give a picture of human flaws and the timeless problem of the has-beens and the misfits.

Things get into high gear with the totally surreal Bolero sequence, a joyous exercise of absurdity haunted by a dark and more familiar figure that keeps drifting in and out of view. It is by almost any standard the high point of the film, but in many ways, it distracts more than it helps. We then get a darker vision in the next segment, set to “Valse Triste”, so bleak it seems literally post-apocalyptic up to the very end. Things get more disjointed in the frivolous Vivaldi number, but get back in line as we follow the terrified snake through the march of progress. Then there’s the ending, which builds up to a nuclear war accompanied by a few notes of the 2001 theme, only to come back to the bickering of the producer/ Presenter and the Conductor. It’s charming, irreverent and intermittently insightful, but at a certain point the critique starts to rebound on itself.

With all that, I still haven’t got the “one scene”, and I’ve spent much of the time trying to figure out if it can apply to this one. I very seriously considered the entirety of the Valse Triste sequence, so you can count that as honorable mention. But what I have kept going back to, as often happens, is a literal throwaway gag. In the midst of one of the earlier live-action sequences, the Animator draws a little man who comes to life in full color; in fact, it’s Bozzetto’s most famous creation in his homeland, a character named Mr. Rossi. The character happily explores the paper, even after the sheet is accidentally cast aside. But then the paper lands beside the chair of the Conductor as he lights a cigarette. With his usual indifference, he carelessly lowers his hand almost to the floor, still holding the match. Of course, the paper catches fire. The little man’s mannerisms become desperate as he tries to escape the flame, but even the living drawing cannot leave the paper. He finally puts on a happy face as the last of the paper burns into ash. It’s a perfect combination of comedy and existential horror, far from the only one in the movie’s length, but easily the best.

Now, I come to the rating, which I’ve been complaining have been low lately. I would be happy to give this one the highest rating, and it’s certainly as good as more than a few I have given that distinction. However, I can’t quite justify it to myself. In part, I have the same problems with this movie that I have already commented on with Italian movies; even where I like it, I don’t feel like I get it. On another level, however, I can’t avoid the feeling that this is a movie that doesn’t quite reach its potential. It is an especially literal case of the parts being greater than the whole. The individual segments, especially the third and fourth, are among the best animation of this or any other era. Yet there is simply not enough here to sustain a feature-length movie, particularly for audiences across cultural lines. One can further discern a reason for its limited availability, especially by comparison with Fantasia. The Disney film was still relevant in the 1970’s and long after because it has continued to appeal to new generations. Its imitator, now older than Fantasia was then, has only dated itself more and more. It remains by all means worth watching, but the one thing it is not is something worth imitating.