No Good Very Bad Movies 8: The one that's worse than Troll 2 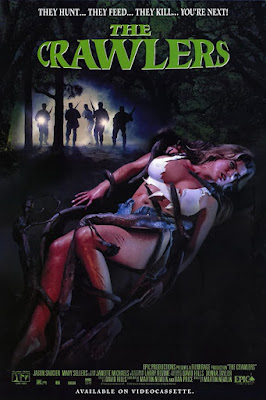 In all the reviews I’ve done, one thing that has never come up is what happens if I quit watching a movie. A big part of that is that I can sit through just about anything, at least once. When I do bail out, it usually means either that I’ve chosen to wait for a better time and mood, or I’m not interested at all.  Even in the course of this feature, the only exception I made so far was for a movie I considered effectively unavailable. This time around, I have the real deal,  a movie irritating enough that I refused to watch it in full. It just happens to be the listed “sequel” to one of the most notorious “bad” movies of all time. I present The Creepers, a movie allegedly released as Troll 3.

Our story begins with a spunky young woman named Josie returning to her hometown. But all is not well, as an equally attractive waif is brutally killed by an off-screen threat. While Josie reconnects with her old flame, we also meet a whistleblower at a powerplant is convinced that the plant is polluting the woods with radiation, something he decides to mention to the local woman of ill repute rather than any media outlet. In short order, more bodies pile up. With help from the madame, Josie’s boyfriend realizes the truth: The attacks are being committed by the forest itself, brought to life by the radiation. Of course, the authorities prove to be either disbelieving or corrupt agents of the power plant engaged in a coverup. As the onslaught of the vegetation continues, our heroes race to clean up the radiation at the source. Can they stop the plants, or is the town fertilizer.

Creepers was an Italian/ American science fiction/ horror film by director Fabrizio Laurenti and producer Joe D’Amato. The film was an effective follow-up to Troll 2, also produced by D’Amato and his Filmirage operation, to the extent that it was shot about a year later at many of the same locations in Porterville, Utah. The role of Josie was given to Mary Sellers, known for The Last Temptation of Christ and various Italian genre films by Laurenti and others, with the rest of the cast apparently filled out with local residents. The movie was completed in 1991, and was reportedly released direct to video in Japan the same year. Its US release was delayed until late 1993. The title was the same as the US title of the 1985 film Phenomena, It had at least 2 alternate titles, The Crawlers and Contamination .7, with the latter title being used most often in later circulation. It is widely reported to have also been released as Troll 3, along with an unrelated fantasy film by D’Amato; however, this cannot be readily confirmed from readily available posters and VHS art. In 2013, it was released in a combo pack that also includes The Dungeonmaster. Sellers and Laurenti married in 1994 and have two adult children, both actors.

For my experiences, this is a film that was literally picked at random. When I ordered The Dungeonmaster, this one came with it, and to my best recollection, I watched it a little before I reviewed the infamous Troll 2. I mentioned this one in passing in the course of that review, in part to make my point that Troll 2 is hardly the “worst” movie. (I also chose Creepers as my preferred title at that point, simply because it actually is a term for some kinds or plants.) If anything, I downplayed just how bad I considered it, until I could take another look. Now, I can confidently say this is far worse than Troll 2, and the best way I can put it is analogy: Troll 2 had as much to do with Troll as Star Crash did with Star Wars, and this makes Troll 2 look like Empire Strikes Back.

I also have to say something about the circumstances of the viewing on this one. I watched this one before bed on a work night, and after about an hour, I skipped forward perhaps 15 or 20 minutes just to get it done. That was enough to make it “disqualified” by my rules, but I have absolutely no qualms evaluating the film. The foremost issue is pure amateurishness. The acting ranges from mediocre to astoundingly inept, with the latter being prevalent in the “authority” figures who get the biggest chunks of dialogue. On top of that, the lighting and camerawork are sketchy enough that there’s long stretches when you simply can’t see what’s going on, though issues with preservation and the quality of transfers undoubtedly played a part. Normally, when I encounter obvious incompetence on this level, I have shown backhanded mercy and simply written the movie off. What pushes a movie like this outside the realm of ordinary ineptitude is that there are still glimmers of imagination and competence, which ultimately just make the whole feel rushed and lazy. Just compare this to Evil Dead, whish they clearly ripped off, or even Troll 2, and you will see what a difference care and an interesting idea can make.

With all that out of the way, there’s still plenty more to vent about. A core issue, and a major reason I bailed, is that this movie feels overlong even at 90-some minutes, and that definitely shows in the allocation of screen time. What I find most striking but hardest to explain is a strange sense of reversal, where even the “bad” feels like it is in the wrong places. The routine romantic hijinks actually achieve a kind of cringey amusement, conspicuously when the heroine’s main love interest visits the madame. The effects and gore, notably the demise of a bad cop, are tolerable to decent, when and if you can see a damn thing. But what’s completely baffling is the “technobabble”, which is not only longer than it needs to be but stretched out through the whole movie. Wat’s worse, as alluded to above, is that the vast majority of it is given to the worst actors. Now, this is already something that wouldn’t matter to true genre fans any more than the plumbing in an adult film. But it would usually go without saying that this kind of nonsense would be delivered by an actor good enough to add a pretense of conviction and authority, like Vincent Price or Jeffrey Combs. Only a movie this inept and cheap would need to prove why this cliché became a cliché in the first place.

For my “one scene”, this will be a rare case of an honorable mention. My original plan was to cover the final and easily the best scene, an obvious happy ending turned obvious jump scare that I remembered favorably enough not to quit outright. But the scene I ended up coming back to was what I encountered on skipping ahead to what proved to be the last chapter on the disc. So what do they show? An office, in broad daylight, and oh dear Logos, there’s bad actors talking about the pseudoscience we don’t care about again. I think I fast forwarded again at this point, because I had to take another look during this review just to figure out what if anything happens. As it turns out, things take an interesting turn when the stock corporate bad guy draws a gun. The camera effectively follows the weapon as he waves it around, proving once again that the crew can do a good shot if they bother to try. After the inevitable retort that good will prevail, he declares,  “Nobody’s going to get me!” What follows is, like most things, predictable and unneeded.

In closing, I come back less to the rating than the wider context. I suppose saying I didn’t finish this movie might come across as a kind of boast, but it really is not. I already had watched this movie once, under somewhat more favorable conditions, and I have certainly gotten through others that are actually worse. (Have I mentioned I watched Ingagi and the Battletoads pilot?)  If not for these circumstantial details, I would give this movie no better or worse than 2 out of 3. I absolutely can say it’s “worse” than Troll 2, and plenty of other supposedly “worst” films, but to me, this doesn’t give any more sense of accomplishment than scoring a touchdown against Cumberland College. I keep saying, when dealing with the true worst of the worst, the best you can do is pick out a representative simple. The further fact that Troll 2 has more notoriety than this just goes to show that ordinary viewers don’t have the knowledge and masochistic dedication to do even that. And with that, I wrap this up and move on, if possible to something actually good.