The Legion of Silly Dinosaurs: Invicta vs. Imperial mixed lot! 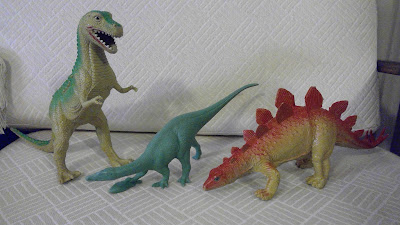 It's getting close to Halloween, and I haven't yet done my dino blog for the month. I decided it was time to do something I've had for a little while. About a month ago, I ordered a lot of three dinos, mainly because I recognized one as of much more value than the others. What I got was a group more eclectic than a lot of the mixed army man lots I have. To kick things off, here's a pic of the one actually worth something. 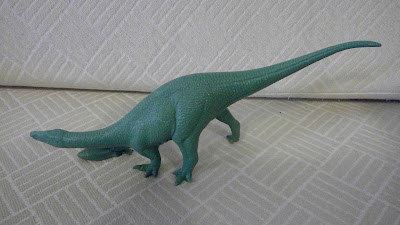 This guy is a Baryonyx from Invicta, dated 1989 per Dinosaur Toy Blog. We last met this manufacturer with the plesiosaur last month. The company is a UK manufacturer, best known for selling to and through the British Museum. This was of further note as probably the first toy/ collectible to portray the species and by extension a "modern" spinosaur (see the Spinosaurus post), which many consider to be among the manufacturer's best. I had long since figured out that that these command some of the highest prices of any vintage dinos, usually with an extra hit for overseas shipping.  The upshot was that the Baryonyx alone was easily greater than the total price for the group put together. Here's some more shots of what I got. 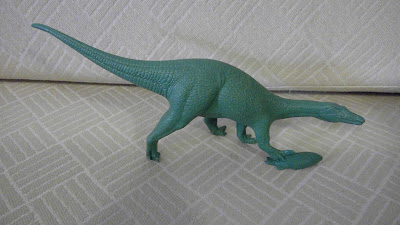 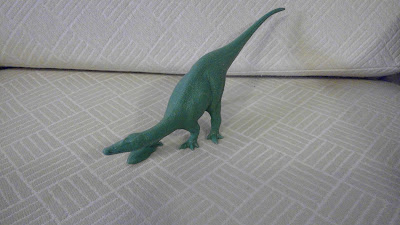 Overall, this one is a nice enough find, but not really living up to its reputation. The best thing I can say is that it arrived in good condition, albeit with a gritty feel. It also gives good texturing for the skin, and a fair likeness of the head. As a nice extra touch, it's sculpted with a fish in one hand. But then there are things that are just unnecessary strangeness. The nostril is too far back on the head, for example, and the claws on the hand don't look quite right. The egregious problem is the feet, which are much too small and shaped so oddly they don't even match each other. What it feels like overall is something made too late and too early. It's bigger than a Marx dino, without being anymore playworthy, while still lacking the accuracy and overall quality that would come into play in another decade. Here's a closeup to show what I mean about the feet. 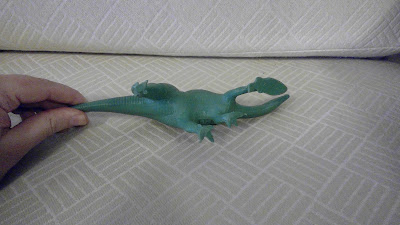 And here's a shot with the plesiosaur. 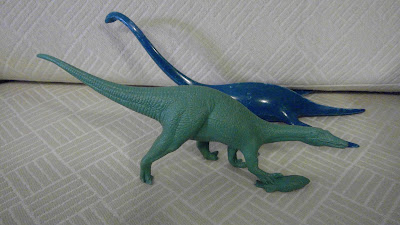 The other two were from a brand I have long been familiar with, Imperial. I mentioned them in my post on "bigmouth" dinos, the cheapest of the cheap vintage dinos, as well as the mystery Godzilla knockoff. I described Imperial as a maker of "bigmouth" dinosaurs, but I have gone back and forth whether their products deserve what that label means to me. They certainly made dinos and other creatures that look like bigmouths, but there are certain characteristics that are difficult to confirm or rule out without direct handling. As it happened, the lot was filled out with not one but two Imperial dinos. Here's the first, a stegosaur. 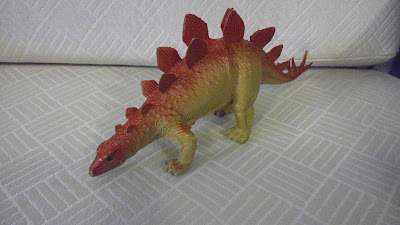 Grr. Rawr. I must be British because I'm not showing my teeth. 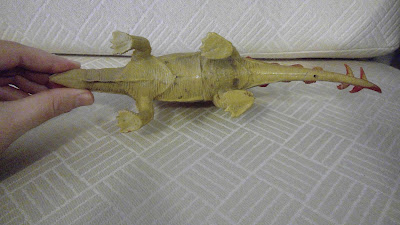 This one shows the Imperial style. It's clearly cheap, but not egregiously so. Conspicuously absent is the open, hollow mouth of a "bigmouth" dino. The material reflects the intermediate quality, flexible without being entirely rubbery. It's just good enough that I don't have a lot to say. Not compared to the motherlode... 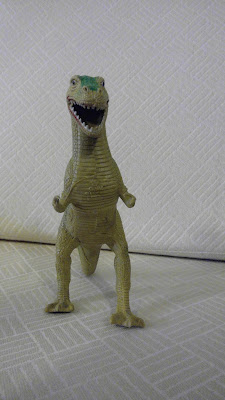 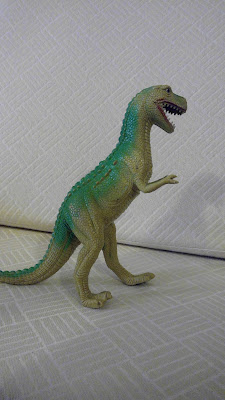 This guy was one I ran across in research for the "bigmouth" post, and the pictures I found left me wondering if I might have owned it. I specifically remembered having a very large dino of the bigmouth type, with a yellow and green paint job. This one came closer than anything else I could confirm existed, especially in the color. Beyond that, it was clearly a successful design that still gets decent prices. Alas, even a cursory inspection confirmed this was not the dino I remembered having, and undoubtedly of far better quality. In particular, while it is sculpted with an open mouth, the internal space is cordoned off. Here's one more pic. 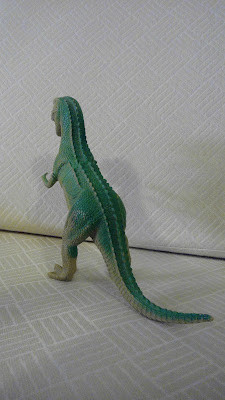 In the process of this post, I dug up a little more material I decided could wait for another day. What invited further attention was the perfectly unthreatening posing of those thin, little arms. It's so ineffectual, it calls to mind any number of stereotypes (not to mention the saga of When Dinosaurs Ruled The Earth). As I pondered it, I realized I was feeling a certain deja vu, and that was when I thought of this.; image credit Joe A Day.

This is the GI Joe Dino Hunter playset, released in 1992 as a preemptive Jurassic Park cash in. I personally have no recollection of it, though I remember well the pitiful state of the final days of the Joe line. (I kept buying them anyway...) Among the few who know about it, this is remembered not just as a low point for GI Joe (really not even that low if you really remember), but one of the most notorious low-end dinos of all time (and one of the most expensive if you try to get it). Once I thought of this angle, the first thing I wondered was if Hasbro had simply bought up a stock of the Imperial dinos for the set. On examination, there were quite clear differences, especially the crossed arms, which if possible make the dino look even more ludicrous. On the other hand, the resemblance is far too strong to doubt that this is a direct ripoff. Just how Hasbro could have come to the point of stealing from Imperial is a whole other mindboggling can of worms. For extra hilarity, here's the box art. 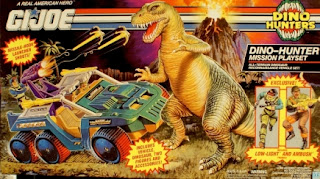 And now, of course, I had to have a shot with the Truckstop Queen, with the Couch Mark 2. Holy kaka, this thing is big! 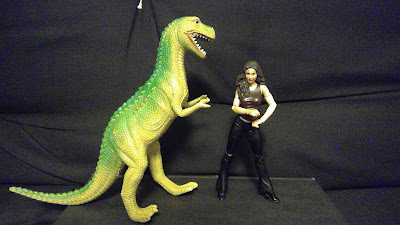 And the Duchess aka Connie... 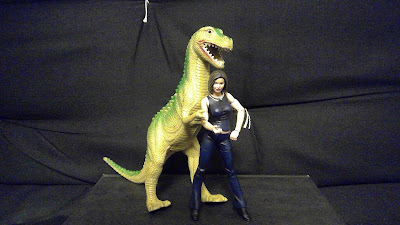 "He's all apex predator to me!"
And with that, I'm wrapping this up. It's just enough dinos for a month that's been very busy, and I have plenty more lined up. That's all for now, more to come!
Posted by David N. Brown at 3:37 PM