Featured Creature: The one that remade the zombie apocalypse 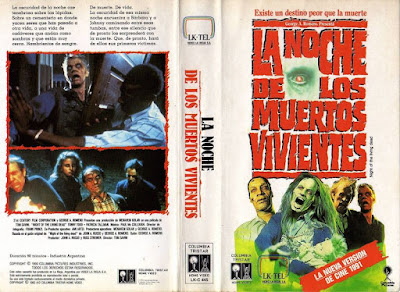 Title: Night of the Living Dead

At this writing, I’ve been going through a series of reviews of the worst movies I’ve seen, and I decided it was time for a break with a good one. I’ve also been pondering the leftovers from my Revenant Review feature I just retired. That quickly brought me to one particular movie I had thought of reviewing for a long time, but never quite fit in even with my dedicated zombie movie reviews. It also happens to be in my estimation one of the very best examples of the 1980s-‘90s sci fi/ horror remake wave, which people now often forget includes The Thing. I present Night of the Living Dead, 1990 edition.

Our story begins with a very familiar scene of two grown siblings arguing on the way to a graveyard. While they are paying their respects, they are suddenly attacked by several bizarre assailants. The sister, Barbara, wrecks their vehicle making an escape, forcing her to seek shelter at a nearby farmhouse. There, she meets a drifter named Ben, who warns of unfolding chaos and carnage in the nearby towns, caused by nothing less than the dead returning to life. They soon discover others holed up in the house, including a redneck couple, an injured little girl and her shifty father, who manages to be racist without ever mentioning anyone’s race. Our motley crew must fortify the house against a growing horde of revenants, or the dawn will find them among the undead!

Night of the Living Dead was a remake of George Romero’s 1968 film of the same name, released in 1990. The film was made from a script by Romero with effects guy Tom Savini as director, with backing from 21st Century Film Corporation and Columbia Pictures. The film starred Tony Todd as Ben and Patricia Tallman as Barbara, with Tom Towles as Harry Cooper. Tallman had previously worked with Romero as an actress and stunt performer on projects including Knightriders and the Tales From The Dark Side TV series. Savini later complained of studio interference and cuts imposed by the MPAA, as well as limited support from Romero. The movie earned a limited $5.8 million box office against a $4.2M budget, and received mixed or negative reviews. The film received a VHS release but relatively limited distribution on disc through ca. 2010. It is now available for streaming and through several Blu Ray releases. All digital formats appear to be an 88-minute theatrical cut.

For my experiences, I got interested in zombie movies directly through Romero’s “trilogy”, at a time when there still wasn’t much else on the landscape. Once I had managed to watch the full set, I quickly ranked Day of the Dead as best overall, and Dawn of the Dead as my “favorite”. By comparison, the original Night of the Living Dead increasingly felt like it didn’t really belong, not so much inferior as a prototype or trial run that simply can’t and shouldn’t be held up to the same standards. I was all the more intrigued when I got around to looking up the remake, despite reviews and commentary that were more indifferent than hostile. While I didn’t exactly take to it immediately, I found plenty to appreciate from the start, and I kept coming back to it, long and often enough that it got the further distinction of being maybe the first movie I bought on VHS and then digital without ever viewing it on a disc. This was at a minimum a version of the story that could stand on the same footing as the others in the series, with all the improvements a remake can bring in the places where it really helps. I have been all the more puzzled by the continued negativity about the remake, because it is by any standard one of the best (and unfortunately last) of a peak era of zombie movies.

Moving forward, the thing that stood out to me from my first viewing was that it looked like it was made for TV, an observation I’ve made on occasion that is definitely favorable in this case. It comes especially close to the feel of the 1980s Twilight Zone revival, which was itself a collection of distant but vivid memories by the time I got to this one. Right from the first shots, it feels low-budget and better for it, with a moody, gritty look that comes out possibly even more in an adapt-to-kaka VHS viewing. This also definitely shows in the casting. Todd is far and away the best, literally punching holes in the scenery (very close to a “one scene” nod), but never feels like a “good” actor summing for a paycheck. By comparison, Tallman is clearly the weaker performer, yet still navigates the character arc the story provides. The rest of the cast mostly hover at the level of competent to good, with the standouts being Towles, who makes his character somewhat more rational than in the original, and Ed Moseley hamming it up as the doomed Johnny.

Inevitably, there’s more to say about the undead, and this is where my feelings get a bit more mixed. To me, the best thing about the original movie’s undead was that they didn’t “look” like anything but humans, something I find all the more believable based on actual experiences with dead and decayed organisms. (I once explained my first job to a crime scene tech; she said it was disgusting.) Here, there is an effort to portray visible decay, which inevitably invites unfavorable comparisons to movies that wouldn’t have existed without the original film. Still, these are well above average, with a certain level of subtlety. My personal favorites are an early revenant that has visible signs of an autopsy or embalming (which doesn’t quite fit the usual “rule” of preserving the brain) and another that breaks in early in the siege. The latter brings out the most savage moment of Tallman’s performance as she riddles it with frivolous gunfire. What I found most impressive just in the viewing for this review is how genuinely random their behavior is. There are several points where the undead walk right past a living human, including the zombified child, but then there are others when they change course straight for their prey. The most amusing of many good moments comes when a passing zombie stops at the sound of the hammering from the farmhouse, and then turns to join the horde.

Now, it’s time for the “one scene”, and I’ve already mentioned several that would easily qualify. But of all of this wealth, there’s one that stood out early and ever since. Toward the very end, Ben retreats into the cellar, wounded and visibly struggling. After dispatching the loose revenant or so, he finally relaxes, if only in exhaustion, and turns on a radio. A voice comes through that I long believed was a 1980s-era TV/ character actor, but per the lore is in fact George Romero himself. It’s a strange, almost whistling drawl that works far better than it should. The announcer quickly reveals that events have taken a turn for the worse. The listeners are specifically told not to try to go to the rescue stations that have figured in the plot, with the further matter-of-fact warning, “They may no longer be in operation.” Meanwhile, Ben looks around, and sees a row of keys on the wall. The camera focuses on one in particular, and the view fades to black as Ben laughs. It’s a great moment, enough that it could have made a better ending than what follows, and still representative of the movie as a whole.

In closing, the main thing I find myself coming back to is why I didn’t review this for the Revenant Review. A big part of the answer is that I had trouble enough keeping that feature anywhere near the limited number of reviews I originally intended. What weighed even more heavily against it was that I had intended the feature to be a survey of strange and relatively obscure zombie movies. This movie was in many ways the opposite, not only created by the founder of the modern genre, but with studio backing and a “mainstream” tone that at times comes across more like an action/ adventure film than a horror movie. The last thing that leaves is a question I revised this review to put off: Is this in any sense “better” than the original. My unapologetic answer is that I have long since come to prefer this movie over the first one, but even to me, talking about overall quality feels like a dead end. These aren’t just two different movies, but movies made under completely different circumstances. You don’t need to dismiss the one to appreciate the other, but it’s clear that fans and audiences at large never gave the remake a chance. In that light, I’m happy to praise it now, and even happier that this hasn’t ended up in the copyright Hell that has claimed even Dawn of the Dead. Go in with an open mind, and the one thing you won’t be is bored.