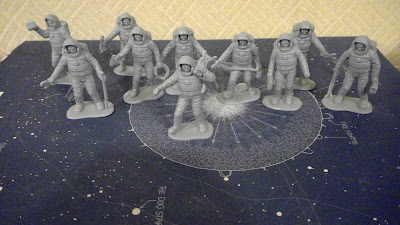 I'm just past the middle of what I planned on as a month of posts every week day, and I definitely needed something quick. I decided it was time for an ace in the hole I have thought about on and off for a while. It's something I acquired a little before I kicked off this blog, and never got back to. As it happened, I had the foresight to take some unboxing pics, and it's just as well, because there's no way I'm ever getting them back in the original packaging. To kick this off, here's the original item, photographed with my phone on the Couch Mark 1. 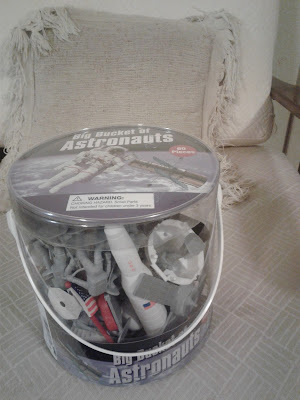 Now to back up to the "mystery" part, I have been sighting these guys for just about the last 10 years, mainly in a hobby/ craft store. What intrigued and vexed me far more than the usual question of who the Hell made this was where to buy them and how they were getting to merchants in the first place. In the course of my inquiries, I repeatedly found what had to be sets from the same figures and molds, at everything from online merchant sites to the gift shops of actual planetariums and science centers. The bucket was the first I encountered, with the most common alternative being bagged sets with a "landscape" mat. Every time I thought of purchasing a set, I looked to Amazon, but it kept dropping in and out of even their catalog until I finally gave up for a while. Then, toward the end of 2019, I saw the bucket was back, so I ordered it. Here's a shot of what I got for the money. 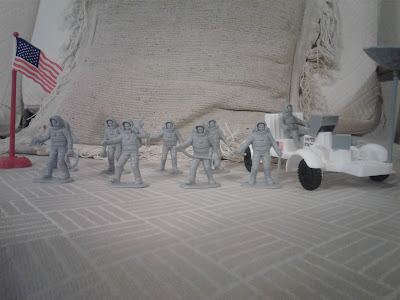 Of course, what I had figured out by then was that these were from Hing Fat, long since infamous among collectors (see the channel for my lapsed correspondent Steve Nyland). This operation previously came up with the '80s ninjas lineup, and before that got a very brief mention in my "space guys to astronauts" post. From the evidence at hand, this manufacturer and quite possibly multiple imitators have been churning these things out since the early to mid-1970s. What amused me most is how jarringly Earthly their tools look. I've made fun of the Marx astronauts for looking like they're carrying a briefcase and a pooper scooper, but I swear these guys look like they're doing yard work, complete with a garden hose. (See the photo with my good camera up top.) What made this a little more interesting for me were the extras, shown in the following pics. 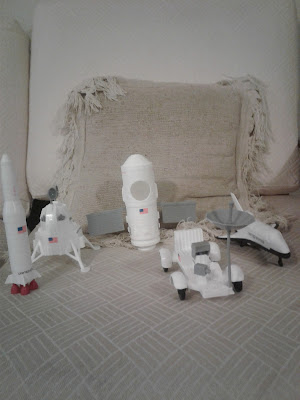 Aa seen here, the set comes with a pair of moon buggies, a wonky lander apparently based on an unused prototype, a two-stage rocket, a sort of space station, and a couple somewhat anachronistic space shuttles, plus a satellite I'll get to in a moment. I distinctly recall one of these had a sticker that had come off in the the packaging, which I quickly disposed of.  There are nice touches here and there, such as a nose of the rocket that actually detaches and a detail sticker on the lander that I believe I left alone. Here's another pic with the satellite, which definitely looks off scale-wise. 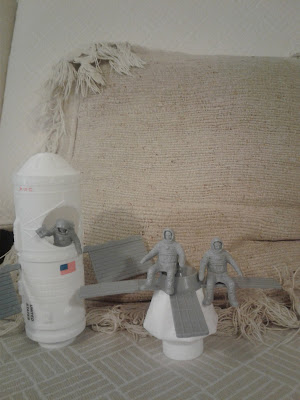 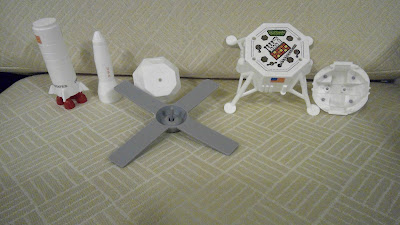 Inevitably, I needed a few new comparison shots. What interested me most was a couple of astronauts I acquired independently. I expected to see major differences, bust what really stood out was that the pair looked less like each other than the bucket astronauts, to the point that I was a little worried if I could keep them separate. Here's a lineup of the separate pair and their bucket counterparts; the latter should be on the left. 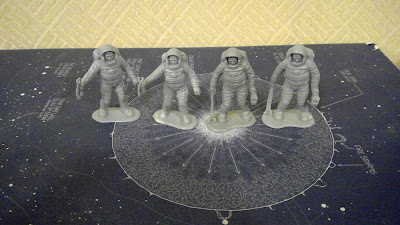 Of the pair, the one with the pliers was the most distinctive. It's noticeably "gracile", with a lighter, somehow cheaper-looking shade. This is the one I could believe came from a different manufacturer. The other guy differs mainly in shade and somewhat better casting. (For comparison, note the egregious "flash" on the vacuum/ Geiger counter guy at the top.) I had a few moments of uncertainty, especially when I realized my "reference" differed from a few in the bucket in having the grabber stuck to the base. Still, a good look at the bases calmed my nerves. Here they are, with the bucket astronaut definitely on the left. 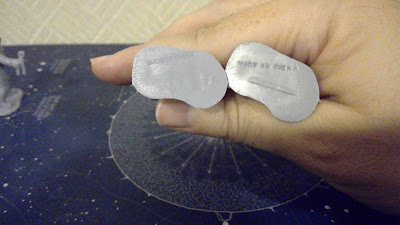 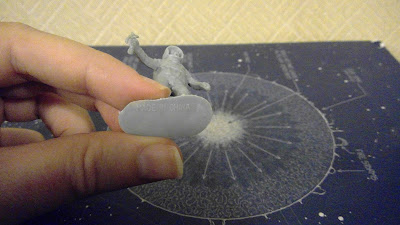 And the inevitable lineup, with an MPC transitional space guy, a Marx 60mm astronaut, and the Galaxy Laser Team commander. 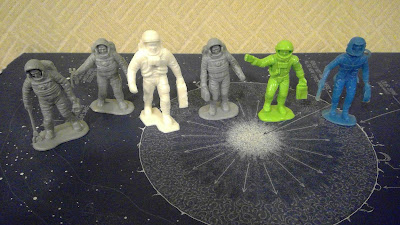 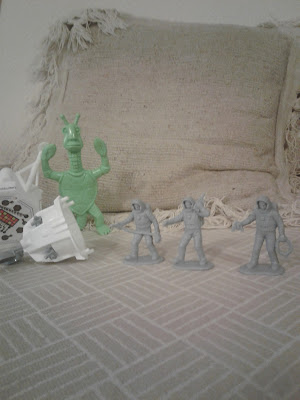 "Houston, we have a problem... Well, for starters, I seem to be talking to you with a staple gun."
That's all for now, more to come!
Posted by David N. Brown at 7:36 PM