Space 1979: The one with a secular rapture 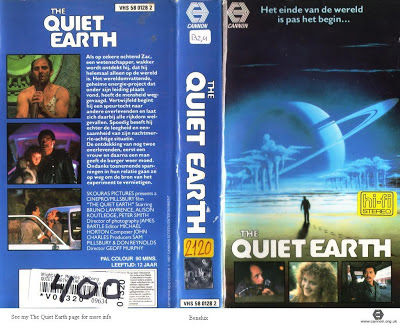 In the course of this feature, I’ve already commented regularly that there’s a lot of “random” in the lineup. There’s a flip side to this, however, which is that sometimes a review gets me thinking of a movie I wouldn’t have considered otherwise. Then if I do decide to give it a review, it’s often after enough time that it will feel a lot more random than it really is. This time around, I have another of those movies, one I had thought of occasionally connection with other movies I’ve reviewed but probably wouldn’t have gotten to if I hadn’t gotten hold of it while making up my mind about some other material. Here is The Quiet Earth, a post-apocalyptic movie with one of the strangest apocalypses on record.

Our story begins with an older but not quite elderly man wakened by an alarm clock, and just the sight of him getting out of bed makes it clear that this is not our familiar world. As the following day unfolds, we see that he is the last man in an apparently deserted world. He continues to try to find others, however, making radio broadcasts and leaving signs; more curiously, he is surprised when he runs across the occasional dead body. After a while, he goes on a streak of cathartic destruction with an oversized construction vehicle, only to end up literally on the brink of suicide. He pulls through and forges on long enough to meet up with a woman and later a racially ambiguous soldier. As they share their experiences, we finally learn that the vast majority of the human population has simply vanished without a trace, something the learned protagonist attributes to a kind of interdimensional rift. He gradually reveals his own further secret: He was part of a top secret project that he believes caused the event. As new disturbances unfold around them, he arrives at a plan to close the rift and perhaps return the rest of humanity to Earth. But one of them may have to go to the other side forever!

The Quiet Earth was possibly the first “major” sci fi/ fantasy film made New Zealand, whose film industry would go on to create the Lord of the Rings franchise (see Dead Alive). The film was officially based on a 1981 novel of the same name, though many critics and film scholars regard it as more directly based on the 1959 film The World, The Flesh And The Devil. The film  starred the late Bruno Lawrence as the protagonist Zac Hobson, Alison Routledge as the lady Joanne and Pete Smith as the soldier Api. All three actors were born or residing New Zealanders, with Smith being of Maori ancestry. Smith’s character is likewise identified as Maori in the novel, though this is not explicitly stated in the movie. The film was released theatrically in the US in late 1985, with an estimated box office of $2.12 million. At least one VHS release has the logo of the Cannon Group. It has been frequently praised among critics and historians of science fiction, including astronomer Neil deGrasse Tyson.

This is one more movie I heard of long before I watched it, which I have come to suspect is a major factor in its relatively good reputation. It really came back on my radar when I mentioned it in my review of Night of the Comet. I brought it up then simply as an example of the very old cliché of a post-apocalyptic world where buildings, goods and infrastructure are somehow left intact enough for the few survivors to wander through. As I pointed out in the earlier review, this “tidy apocalypse” conceit was getting strained even in 1984. What stands out on further consideration is that Night of the Comet moved the concept from the realm of “realistic” post-apocalypse drama to the arguably more forgiving realm of comedy, where it has continued to pop up in the likes of Zombieland and The Last Man on Earth. Given this context, the New Zealanders’ offering is a curious step backwards, particularly when compared to American fare. Next to this movie, even the oddly subdued Defcon 4 is action-packed escapism.

With that in mind, it must be said that The Quiet Earth gets a lot of things right. Its version of the end of the world is post-modern enough to be oddly convincing on its own terms, like a cross between the theology of Tim LaHaye and the cosmology of Charles Fort. There is some further effort to show the kind of disorder and ensuing decay that would really occur if humans somehow disappeared overnight. It’s particularly amusing to see the survivors have to wend their way carefully past wrecked and abandoned vehicles, gridlocked even in death. Most impressively, it has the maturity to raise the problems of race, sexuality and colonialism without turning into a self-congratulatory “message” movie. I find it especially unfortunate to compare this with The Manitou less than a decade earlier, which for all its well-meaning gestures still left a non-native actor with the burden of portraying a character more overtly “native” than the actual natives.

The simple and obvious “problem” in all this is that once the world and the characters are established, the movie struggles to give them much to do in a film barely over 90 minutes. What’s entirely counterintuitive, but by no means unique, is that this becomes more pronounced after the survivors start meeting up. The first third is a poignant vision of existential angst as we follow Hobson’s struggles. When he meets Joanne, there are some good moments, but the pair simply don’t click, romantically or on any other level. Api gets even shorter shrift, and his character is downright problematic; he repeatedly refuses to talk about his past, even when the details might be in his favor, but he doesn’t have the level of introspection and guilt we see in Hobson, or much time to try. It doesn’t help that he and Joanne finally warm up to each other more abruptly and randomly than players in an adult film, which in hindsight is more cringey for the lady’s change of heart than any intended racial angle. All these issues merely aggravate the fact that Hobson’s eventual plan makes absolutely no sense, and if anything it will sound more coherent in my summary than it ever does in the movie. Even if it works, he has no way to know beforehand that it won’t not only kill him but finish destroying the world. Then that all leads to the surreal final shot, which is beautiful and terrifying enough to redeem a lesser film but here feels like an excuse to cut to the credits without having to show what actually happened.

That still leaves me with the “one scene”, and I could have picked a few. The absolute standout, though, is tellingly while the protagonist is still alone. Toward the close of the third act, he sets up a crowd of life-sized cutouts for what looks like a garden party at an expensive house. As he makes his preparations, he remarks a likeness of Hitler, “I’m a busy man. Besides, you had your turn.” After the wiring is done, he goes to an overlooking balcony and delivers a speech to the well-lighted assembly below, accompanied by tapes of cheers from the crowd. Here, he makes his first confession that he worked on “projects which I knew could be used for evil purposes”, promptly adding, “For the common good!” He goes on to talk about the temptations of wealth and power (at one point with a cutaway to Hitler and Nixon), before declaring himself president “of this quiet Earth”. As he reaches the climax of his speech, the lights and sound suddenly go out, part of what we see is a blackout of the city around him. (Later, he will bring in generators.) This is followed with a brief but pointed shot of our protagonist in the dark, his attempts at even ironic self-glorification undone by inevitable entropy.

That leaves me, as usual, with the rating. After Night of the Comet and especially Defcon 4, this is admittedly a case of a lower rating going to a better movie. I freely acknowledge that this has a lot to do with my personal reactions to it. On a certain level, I find this movie the embodiment of what happens when “mainstream” talent tries to move into sci fi. They come across like a rich kid trying to impress the chess club, self-consciously intellectual but still not as “smart” as they want to be or think they are. Of course, the production values, acting and overall quality are well above average for the genre, particularly at a time when it was still struggling to rise above its “low budget” roots. But if those were the only things that mattered to people who really love science fiction, we would be watching Kramer Vs. Kramer, not Dark Star.  Fortunately, this is a case where those involved could at least read the lay of the land well enough to improve on what came before. To me personally, this is exactly the kind of movie where the literal “What the Hell?” is a compliment as much as a complaint. Maybe I don’t “get” it, but I can certainly appreciate it.