Space 1979: The one that put Charles Band out of business 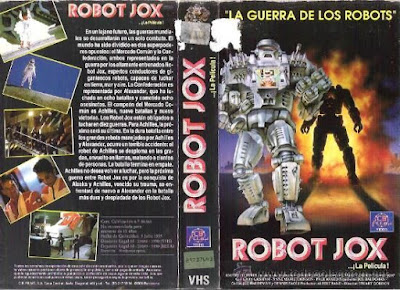 At this writing, I’m up to 75 reviews for this feature (or about 101 for my blog), yet another milestone I had considered for ending the whole thing, and I’ve long since planned on something special for this one. And for all the obsessing I usually put into choosing these things, there’s one I’ve had in mind all along. It’s one of the latest of the movies I’ve considered for the feature, yet at the same time one of purest embodiments of what it’s been about all along. Here is Robot Jox, the last film released by one of the most famous/ notorious studios of the 1970s-80s era.

Our story begins with an exposition title crawl, introducing us to a world where war has been replaced by single combat, except as a grim scene that follows reveals, these are not individual warriors but giant machines. We then meet Achilles, champion of an alliance simply called the Market, and his crew, including a veteran fighter named Tex and a scientist referred to as Doc. They prepare for the next match, a fight for Alaska with the rival Confederation’s own hot-headed fighter Alexander. When the match ends inconclusively despite the deaths of a bleacher full of spectators, the crew suspects a spy in their own midst. Meanwhile, a genetically-engineered newcomer named Athena is gunning to take Achilles’ place. But the real bombshell comes when Achilles announces that he is quitting after completing 10 fights, enraging both his fans and Alexander. Will Athena take the field, or will Achilles return for the final fight? Will the traitor be revealed? Will anyone fight by the rules? Do these questions ever need an answer??? Not really, but there will be some twists in the details, which is what movies like this are all about.

Robot Jox was the last major release from Charles Band’s Empire Pictures, the most over-represented crew of chronic offenders on this feature or blog short of Roger Corman and the country of Italy. In fact, the movie was largely completed in 1987, while the officially acknowledged “final” Empire film The Catacombs was filmed the following year. The film was directed by Stuart Gordon from a script by Joe Haldeman, best known for the award-winning ‘70s science fiction novel The Forever War; there were many reported creative differences between the two, with Haldeman favoring a more serious tone. The film starred  Gary Graham as Achilles and Paul Koslo of The Omega Man as Alexander, with Anne-Marie Johnson as Athena. Extensive stop-motion and other effects for the robot battles were provided by David Allen, based on designs from Alien production designer Ron Cobb (see Doctor Mordrid and Dark Star respectively). The movie’s unprecedented $10 million budget contributed to financial problems that ultimately resulted in Empire’s bankruptcy. Because of these and other problems, the movie only received a limited theatrical release in 1990 with a gross of $1.27M, a year after a novelization was released. It became a cult hit on home video, with a Blu Ray release in 2015.

For my experiences, I can just remember being aware of this movie when it came out, including a sighting of the novel. Given my usual pop culture tunnel vision, I never questioned that it had been an outright hit. By the late ‘90s, I picked it up as a video rental, after recognizing Haldeman’s name on the damn thing. At some point, I picked up a VHS tape, and finally bought the Blu Ray when I tried to phase out my tapes a few years pack. Along the way, I have learned a lot more about its history, and the one thing I find truly interesting is that it is and was the kind of movie people tend to assume to be a ripoff/ knockoff when there were really few if any movies like it. It was obviously and admittedly based on animation/ anime like Voltron and Transformers (the movie version of which couldn’t have helped matters), but the conversion to a live-action feature was an honest tribute made well before the West’s on-again-off-again bandwagon started. It can be said to build on The Terminator and other robot and/ or post-apocalyptic movies, but that’s a big tent to build a criticism off of. What I really find it closest to is Total Recall, though I can’t exactly say why. To me, the two “feel” like spiritual kindred, even if they differ in most ways one could list off, and that’s enough for me to put this in the “runnerup” category.

As for the movie itself, almost anything I can say is positive. The acting is decent, the dialogue is good, the music is pitch perfect and the effects are among the best of the very best. What’s important is that the movie fleshes out its characters and their assumed world, warts and all. (In that, at least, it can certainly be compared to Total Recall.) It is worth particular note that we never see much of this posited future beyond the duels, yet we still get quite intricate detail out of establishing shots and incidental dialogue. The fans are poor and “gritty”, but still happy to be there. The jocks are as larger-than-life as they are clearly expected to be, with plenty of human failings in the mix. The bots and the facilities that support them are sleek and clean, with an already old-school feel, which I freely admit is pretty close to my own exotroopers. One extra detail I will mention is that the cockpits the jocks are in are quite functional, an issue I was just recently ranting about in one of my toy blogs. They’re no bigger than they need to be to hold a pilot, with a glass framework that actually gives an excellent field of view, and they’re positioned around the center of mass for a good compromise between protection and visibility. It’s exactly the kind of detail far later examples get wrong, I’m sure a part of Cobb’s contribution to the project.

Of course, all of this builds up to the final battle. It’s all wildly over-the-top, complete with a Freudian giant chainsaw. At the same time, it becomes a thought experiment for the premise of gladiatorial combat as a substitute for warfare, and perhaps the whole concept of “rules” of war. There’s also an intriguingly nuanced “slippery slope” in effect. It’s Alexander who obviously goes over the line, starting well before the end; when he really snaps, the surprise is that the referees don’t get hit with the full force of his guns rather than a symbolic stomp. But Achilles and for that matter Athena are clearly on their way down the same curve. As the battle becomes a brawl, there’s a sense of history starting over, inviting the question whether the duels of our myth-shrouded past went out of favor for the same reason. The devolution becomes literal as the combatants reduce each other to hand-to-hand amidst the wreckage of the machines, culminating in the movie’s genuinely poignant final lines.

In all this, you might expect I would be struggling for the “one scene”, and I’ll admit you wouldn’t be wrong. Nevertheless, there was indeed one segment that caught my attention during viewing for this review. As often happens, it’s one of the scenes furthest from the action, as Achilles visits his brother after quitting the games. He’s met at the door by a woman with a child in her arms and another clearly on the way. During casual greetings, she remarks, “We do our part,” and then adds, “With six kids, we get three bedrooms.” As they gather at the table, the phone rings. When the lady answers, we hear a threat against Achilles, to which she responds, “Up yours too.” As she brings dinner to the table, the brother says, “We’ve had a few calls like that.” Then his wife lifts the lid to reveal the meal, enthusiastically endorsed as “real meat!” The scene closes with a brief, pitiful shot before the camera cuts away. It’s our longest and most intriguing glimpse of their day-to-day world, with an unsettling preview of the incoming age of the internet.

In conclusion, all I can say is that this is a movie that’s almost above criticism simply because it is never anything more or less than what it clearly set out to be. Detractors can pick out its flaws from orbit, and usually they’ll be right. But at the end of the day, the objections are like criticizing Reanimator for being too gory, Terrorvision for being too silly or The Day Time Ended for being too much like a bad acid trip. The Band crew’s specialty was following through with an idea, not asking if it was a good one, and this was their masterpiece. It’s all the more fitting that it saw the light of day right when the ‘80s gave way to the ‘90s. Band and his associates would forge on, but their true heyday was done, and the world was poorer for it.