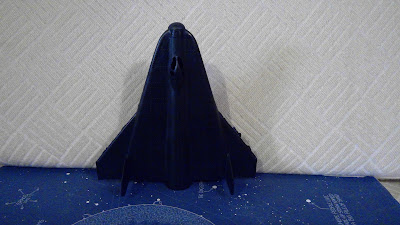 It's time for my 2nd planned week of posts this month, and it happens I have something backlogged. As an extra twist, I had already prepared both pics for a blog post and a video on the matter more than a week ago. Rather than do an immediate post, I included a photo with my Space Guys adventure demo. I used the intervening time debating what to do, and of course decided nothing until it was almost too late. What I settled on was to put up the video first, and use this post to follow up with a deeper dive. This was indeed a long, strange trip worthy of a feature that started with a figure I needed 30 years to identify. To kick things off, here are pics of my unassembled Marx Moonship. 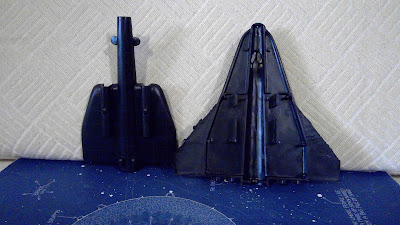 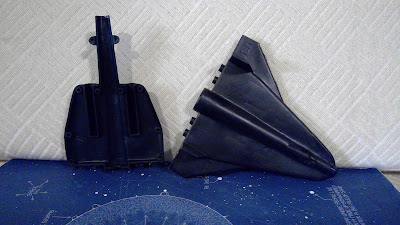 Now for the details, for this adventure, I actually started off with the bare outline of the facts, which is more than I have often had to work with. This is a reissue of the Moonship, one of a ludicrous number of accessories originally included with Marx's Operation Moon Base playset in 1962. I had already featured the two other most noteworthy specimens in a previous post outside this feature, the space station and the Flash Gordon-y tower thingy. Unlike those venerable fixtures, however, the Moonship did not have an afterlife in the later Marx playsets. As further recounted by my lapsed correspondent Steve Nyland/ Space Trucks, the original Moonship has long since sunk out of sight except in astronomically expensive complete examples of the Moon Base playset.

That brings us to the present specimen. It has been offered online for a while now. What is obvious is that the craft is black instead of blue, and the mold for the upper half was substantially modified, turning what looked like tail fins on the original (I have thought of them as retractable) into a more filled-out and decidedly redundant set of wings. It is also apparent that this was done to make the craft look more like a stealth bomber, which was in fact a part of the tailless/ delta wing lineage that presumably inspired the original toy.  That puts the origin of these things around the 1980s, if not later. The modified design is also missing two openings that appear to have been part of a firing mechanism for a pair of rockets/ missiles, which fits the controversies over such things in the early '80s timeframe. The most curious part is that these are coming out unassembled in sealed bags, with the included missiles still attached to the frame. This means either that someone is making these things from recovered molds, or (as I have opined to be far more likely) they have just been sitting around for an indefinite amount of time. The bottom line is that even the person or persons selling them probably don't really know. Here are a few pics of the unassembled components with the Truckstop Queen, who hasn't been coming out much lately; she's still definitely bigger than the thing she's being a reference model for, but it's much closer than usual. 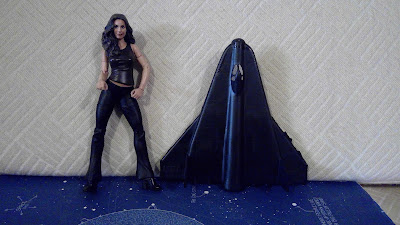 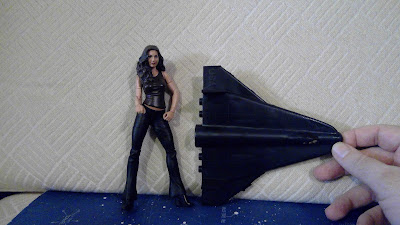 And here's the absolutely awful missiles, which fall right out without the springs. 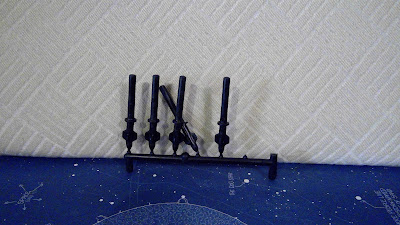 Another detail here is that the nose piece (actually half of one since it's only in the upper part) is definitely an addition. My initial assumption was that this was a replacement for a lost piece, but when I looked into it, I confirmed that original specimens are simply open at the front, reportedly so kids could aim through a corresponding hole at the back. I very seriously considered knocking the added piece right out, but I quickly concluded it's not going anywhere without using a knife. I will also mention, there is a horrendous amount of flash on the modified leading edge of the wings. After accidentally putting a notch in one trying to remove it (after all the photos were taken), I took a file to them. It helped, but they're still rough. Here's some shots of the assembled plane, usually with the nose visible. You may notice a couple ships to one side that will figure below. 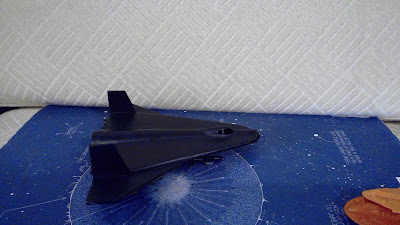 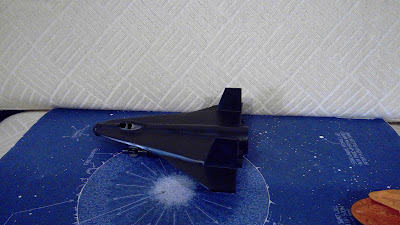 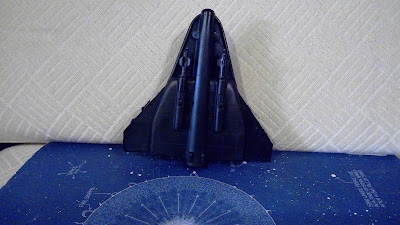 Wow, you can really see that flash...

Now for the actually interesting question, just how did Marx get the idea for this conceptually very advanced design? It really does anticipate the space shuttle, and in fact is in some ways more  sophisticated. With my usual encyclopedic random knowledge and further research, it wasn't hard to find precursors. The bare idea of a triangular tailless aircraft was put to use in the Vulcan bomber among others. The further idea of turning such a design into a returnable air-to-space craft can be traced at least back to the semi-infamous Silbervogel Nazi drawing-board superweapon (see Jalopnik, if anything), which I turned into the Tottenkarte for the Exotroopers adventures. (I just might have to reuse my joke scenarios from that anti-series for the Space Guys adventure to make sense.) Of course, there were intermediate outgroups in this conceptual lineage, most intriguingly the Convair shuttlecraft concept from about the same time the toy came out. The picture that emerges is a toy that did incorporate some very good ideas, without coming out too far ahead of its own time.

Then there's one last thing. Ever since I discovered its existence, I have been absolutely certain that this was the basis for the arrowhead ship in my immortal arcade prize collection, which I had already traced to the Diener Space Raiders line. Here's a pic to illustrate my case. The funny thing is, in many ways, the prize ship fits what I've been picturing better than the original. 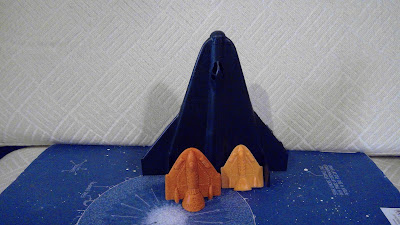 And this is where I wrap this up. This really has been fun, despite the frustrating Wall of Nothing on many of my questions. As I said in the video, If you like Marx space stuff, get this one while you can. That's all for now, more to come!