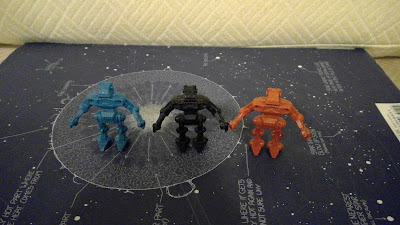 While I have been meaning to get to this post for a very long time, its immediate genesis was a matter of chance. In the vast world of cheap, cheesy and/ or weird 1980s-vintage toys, there is one name so notorious, prolific and unrepentant you can run across them at random: Arco Toys, one of the most prolific producers of vintage low-budget toys. They turned up previously as the only company to admit to making or distributing the notorious "patchisaurs", and I immediately knew them. Yet, I was still being reminded of their creations in the course of researching this piece. The company was best known for generic toys, knockoffs and equally sketchy licensed "rack toys", which they continued to produce even as other prolific offenders were folding or fading away. They also had a somewhat uncanny ability to release knockoffs at the same time or even ahead of the properties that were theoretically being ripped off, notably releasing The Other World the same year as He Man and Space War before Kenner's first Star Wars figures. I can think of no better summary of their work than a quote from Toy Galaxy: "There are good toys, there are bad toys, and there are Arco toys!"

To pick up the trail from the other end, my original encounter with the items under consideration would have happened in the late-ish 1980s, perhaps as early as 1987 or as late as 1989. Somewhere in the midst of other acquisitions, I picked up two robot figures sculpted in "army man" scale, probably as a reward in school. They obviously didn't make a strong impression immediately, but they stood out in my collection for their unusual level of detail and overall quality, which compared favorably to plenty of larger and more sophisticated robot toys. I was particularly impressed with the sculpt shown at the top of this post, which I thought of as "H" for the symbol on its/ his faceplate. I also recognized that the design of both bots seemed intended for peaceful tasks, without a hint of the weaponry that bristled from more typical robot toys then and now. Over time, they became a go-to for a space expedition, typically led by a Timmee Galaxy Laser Team astronaut I also had lying around. Here's a pic of my original pair with a couple Timmee figures: 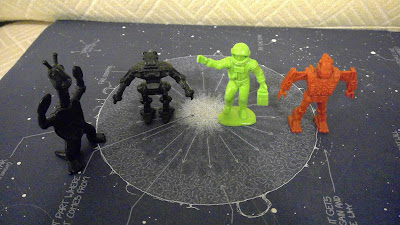 As usual with these things, I only picked up on what the figures were in the era of the internet. In the course of learning about other toys (mainly GLT and "patchis"), I discovered that my bots had been part of a larger set called RoGun Robots, originally released in 1984 around the same time as a series of Gobots with a similar name. Of those who knew of the set, many were unimpressed or entirely critical, frequently further criticizing them as a knockoff of the Gobots line. I further concluded that the ones I had were by a wide margin the best. Still, I searched intermittently for examples on sale, and eventually found a set on sale. Here's a pic of a full selection: 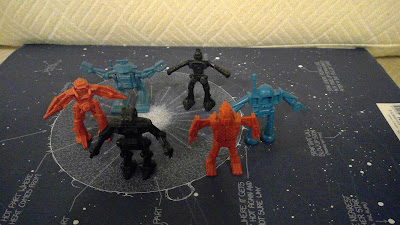 It will already be evident that the critics had a point. The entirety of the set is six sculpts in three undistinguished colors, and since they were typically sold in bags of 48, the whole would have been far less impressive than the individual bots. There were also plenty of flaws with the design of the sculpts. My original pair were reasonably functional, particularly H, but not especially dynamic. I also never could think of a reason for H to have a letter on his face, no matter how much I wanted to. The next best is the short robot with the raised arms. Its design generally matches the aesthetics of the other two, while the pose adds enough flair to hint at actual motion. Here's more pics. 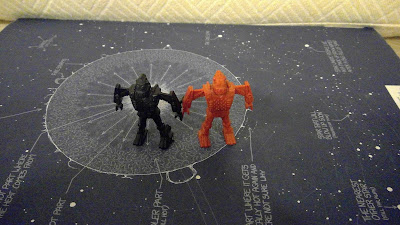 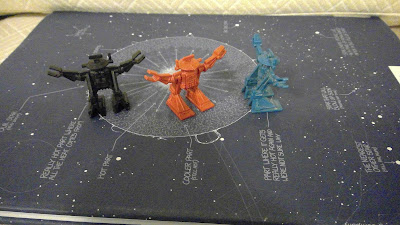 Things quickly go downhill with the remaining three. I consider the next runner up to be the one with the hemispherical head. It still another looks functional, but to me the design hints at a militaristic purpose out of character with the others. The last and least both looked as if they are supposed to fly, with one I think of as "Whirler" even having what look like tiny engines on the end of each arm. Here's more pics of these lesser bots, including what seems to be a variant of the Whirler sculpt. 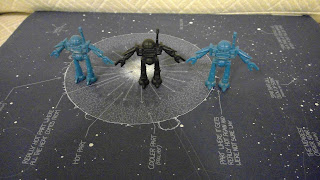 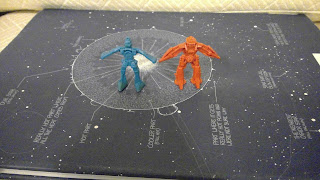 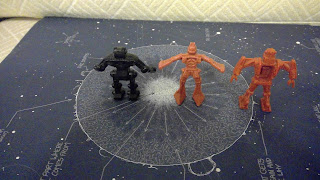 Now, we can circle back to the bigger questions. Were these bots merely knockoffs? Are they any better or worse than other offerings from Arco? At the end of the day, did Arco toys really deserve the notoriety they have received? The honest answer is that Arco was no more guilty than the larger players they took their cues from. When Hasbro's Transformers and Tonka's Gobots arrived simultaneously in US stores, both lines were little if anything more than amalgamations of toys originally sold separately in Japan. While Transformers would focus on unifying existing and new designs under a common mythology and aesthetic, the Gobots line made an equally defensible and certainly more economical decision to continue accepting new items from available suppliers and worry about continuity later, if at all. Of course, one of the companies they turned to was Arco.

Unfortunately, there is little room for argument about the results that followed. Arco delivered a whopping four Ro-Gun bots that resembled bootleg Megatrons from the Bizarro continuum, and several more of the worst and most ridiculed toys to be sold under the Gobots' already tarnished name. I might normally say something in defense at this point, but I must say that the actual Gobots were clearly inferior to the 2-inch toys.  (However, my pick for worst Gobot would have to be the mind-boggling ScooterBot, which I was mildly surprised to find had nothing to do with Arco.) For some reason, Arco decided to reuse the same name for their bagged army man bots, and the rest is history.

Unfortunately, the postscript is that Arco was soon to follow its products into history. While thee is no evidence that the Arco Gobots lost money, they seem to mark the end of the line for the company as a creative force.  The toys that they produced afterward were just as cheap, but with hardly a trace of the streak of psychedelic, near-psychotic imagination that had made seemingly routine products either beloved or notorious. The end of the line surely came when the company was bought out by Mattel in 1986. The toys that came after are like the tributes of a conquered and humiliated vassal, Captain Power dart gun sets, second-tier Disney merchandise and loads of Barbie accessories. It was an ignominious and for and infamous company, but while they lasted, they left a legacy that will linger on in the minds of anyone who lived through it. Because it turns out nostalgia and PTSD are pretty close to the same thing.

Again, I have saved the bulk of the links for last, and this time there are plenty!
Little Weirdos Rogun Robots and The Other World, because this site has everything.
Toy Galaxy Ro-Gun Cap Rifle review, source of the quote in the opening paragraph.
Little Rubber Guys forum discussion of Rogun 2 inch bots
That Junkman overview of Space War
CollectionDX reviews of Arco Destroyer and Aircraft Carrier Gobots